Countless news outlets, such as Minnesota’s MPR, have reported a sales boom in the bicycling industry, including right here in The North Star State. Because of factory shutdowns and high demands on just about everything bicycle-related, there’s a shortage of inventory and repair availability. But that hasn’t stopped the state’s growing cycling population from exploring new terrain each and every weekend. This latest cycling boom has us excited here at Little Norway Resort on Park Rapids’ serene Little Mantrap Lake, as we’re a short drive from several iconic Northern Minnesota bike trails.

This summer and fall, thousands of Minnesotans will swap scenic drives with scenic rides and strenuous hiking with fast-paced biking. Three of the most iconic (and meticulously maintained) Northern Minnesota bike trails can be found within minutes of historic Little Norway Resort, a particularly peaceful slice of sprawling Hubbard County. Cycling is a way of life for many locals and repeat visitors, chiefly because of nearby attractions, such as Itasca State Park and the intertwining Heartland and Paul Bunyan State Trails. Let’s take a closer look at these family-friendly Minnesota bike trails.

A 5.8-mile paved bike path connects the state park’s eye-popping Visitor Center to the world-famous Mississippi River headwaters. Sections of the trail meander along Lake Itasca’s east arm. Most cyclists park near the Forest Inn and set out for the 11.6-mile out-and-back journey in the morning. Speaking from experience, keep an eye out for bald eagles, songbirds (particularly warblers), deer, blue-spotted salamanders, fishers, and, occasionally, beavers and river otters. We recommend combining several hours of bicycling with a hike on Dr. Roberts Trail and a climb up the jaw-dropping Observation Tower. Also of note: Cyclists can share the 10-mile Wilderness Drive loop with other automobiles.

One of our favorite family-friendly Northern Minnesota bike trails is the Heartland State route from Park Rapids to Dorset, a cute village with kitschy shops, eclectic dining, plenty of ice cream, and, surprise, a four-year-old mayor! Dorset is a quintessential summertime roadside attraction. All in all, the Heartland State Trail spans approximately 49 miles from Park Rapids to Cass Lake, home to a casino, state park, and golf course. Many riders stop in Walker, yet another sublime small town, to shop, dine on fresh-caught fish, and taste-test award-winning craft beer at the newly-rebuilt Portage Brewing.

Experienced riders know all about Paul Bunyan. No, not the iconic statue in nearby Bemidji—the 123-mile paved trail. It’s not only regarded as one of the premier Minnesota bike trails, but it remains one of the lengthiest rail-to-trail conversions in North America. In theory, cyclists can start in Bemidji and pedal all the way down to Crow Wing State Park. The trek typically takes two or three days—a popular Minnesota cycling challenge. Thus, we recommend choosing a chunk of the route, such as Lake Bemidji’s eastern shoreline, adorable Nisswa (Big Axe, StoneHouse Coffee, and Loide Oils are musts), or the aforementioned Walker area.

After several hours of biking in Itasca State Park, Park Rapids, or Bemidji, return to Little Norway Resort for a home-cooked meal, a paddling adventure, and a roaring campfire, complete with ghost stories, roasted marshmallows, and some of the best stargazing in the state. This rustic respite, formerly known as Camp Lloyd, has been putting smiles on family’s faces since the early 1950s. Amenities include exclusive beach access, scheduled activities, and free watercraft rentals. Please give us a call today at 218-732-5480 to learn more about our family-owned resort. Otherwise, feel free to check availability online!

What To Expect At Your Minnesota Resorts Cabin Rental
Delicious Breakfast Restaurants Near Park Rapids, MN

Subscribe to receive the latest news from Little Norway Resort!

Send us a message 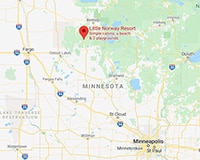